The upcoming film Obvious Child embraces the romantic comedy genre, but takes on another identity as well: “abortion comedy.”

Romantic comedies surrounding an unplanned pregnancy are not new to film.  Juno and Knocked Up are just a few films that create stories around this topic.  However, Obvious Child tackles the same storyline but dares to take it in a new direction. 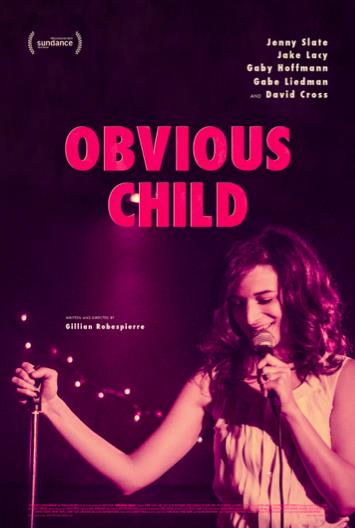 Director and writer Gillian Robespierre said she was, “rubbed the wrong way by the misrepresentation of women on screen when it came to unplanned pregnancy.”

Robespierre wanted to stray away from a movie in which the woman wavers between options, unable to make a decision.  Instead, Donna Stern (Jenny Slate) immediately knows her own mind and chooses not consult the father (Jake Lacy). Donna rarely exhibits shame for her decision and she even pokes fun at it throughout the film.

Robespierre does a phenomenal job at de-stigmatizing abortion by featuring various aspects of the experience, even the procedure itself, exclusively through Donna’s eyes.

Following the procedure, the film concludes with Donna and Jake curling up for a movie, hand-in-hand.  With smirks across both of their faces, Obvious Child creates a new image of “happily ever after.”

The National Action Center of the National Organization for Women (NOW) was given the opportunity to see an early screening of Obvious Child late last week.  The film opens with a stand-up performance by Donna, including provocative jokes about her underwear that is so dirty at the end of the day it looks like “it climbed out of a tub of cream cheese.”  The audience immediately keeled over in their seats, laughing hysterically, at the courageous honesty displayed throughout the film.

[Check here to see if there is a free showing in your area.]

“I just wanted to make sure Donna was lovable,” said Slate .  “I’ve played a lot of characters people have to laugh at, but not necessarily love.”

I think that’s what makes Obvious Child such a successful, challenging film for a variety of audiences.  Slate creates a relatable and lovable character through her honest comedy. The film could really appeal to all audiences, even if her portrayal of abortion does not.  Robespierre builds up the character of Donna Stern in an endearing light, capturing the audience’s heart and challenging them to look at abortion in an extremely unique way.

The character execution of Jenny Slate combined with the storytelling of Gillian Robespierre make Obvious Child a potential game-changer in how abortion is represented in the media.

26 responses to “Obvious Child – A Review”