This August NOW’s President Terry O’Neill was arrested in front of the White House as part of a protest for comprehensive immigration reform. Terry and other immigration activists were specifically protesting the deportation and separation of families. Feminism intersects with the need for immigration reform first and foremost because the immigration system is inherently discriminatory, and feminism calls for the eradication of all systematic inequality. Sexual and domestic abuse does not discriminate based on citizenship-status, and ensuring safety and justice for all survivors, including immigrants, is a pressing feminist issue. 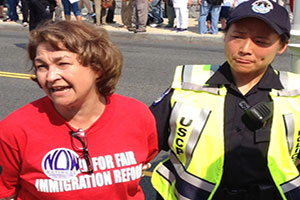 When families are split up and deported, they are often sent back to the dangerous, life-threatening situations that motivated them to seek refuge in the first place. Women and children are fleeing domestic violence, sexual violence, and human trafficking in their previous homes with alarming frequency, and deportation perpetuates that cycle of violence. Women who immigrate to the United States are especially vulnerable to exactly the kinds of violence and oppression feminists are working to stop. When the US immigration system sends women back to situations of abuse and a dearth of financial opportunities, it is ensuring that women remain oppressed and abused. If women’s rights activists choose to ignore justice in immigration reform, we are failing our most basic mission to protect women from violence.

Even when women do make it to the United States, they then face a second form of oppression at the hands of the immigration system. The way the US immigration system is structured is inherently misogynistic in both design and practice. When applying for an employment visa, forms of labor that are traditionally gendered female (i.e. domestic labor) tend not to qualify individuals for employment visas. Even the provisions to protect female immigrants in a landmark piece of feminist legislation, the Violence Against Women Act (VAWA), contains strict requirements for asylum that make it difficult for women to gain admittance to the United States. Even in the situations where women are granted asylum under VAWA, they face discrimination in employment opportunities because of their dually-oppressive status as “female” and “immigrant.” The intersection of these oppressions is important to address, and is why it is so important for the feminist community to support and advocate for the rights of immigrant women.

Though the United States has a long way to go in our battle to end violence against women, immigration can be a powerful tool in helping women from other countries escape sexual violence and femicide. Our current immigration system treats female immigrants as less important than male immigrants through misogynistic policies and procedures. Feminist activism can be and is a powerful force in improving the lives of women who enter the immigration system of the United States. Comprehensive immigration reform is one structural change feminist activists must help to pass or risk becoming almost as exclusionary as the very systems of oppression feminism is designed to challenge and dismantle.