It is time for America to join the ranks of most other developed nations around the world and restrict abortion at least at the point at which science tells us that unborn babies are capable of feeling pain. 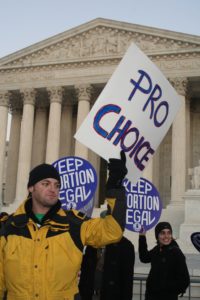 Several prominent senators seeking re-election believe that a 20-week abortion ban is a way to move the US into the present and align itself with the abortion policies of other “developed nations.” Interestingly, those Republicans choose to focus on the gestational limit of other countries without examining their other policies that make abortion far more accessible than in the United States. With free, publicly funded abortions in publicly-funded hospitals in more than a few countries across Europe, abortion is far less restricted than in Texas with its eight abortion clinics for a state of nearly 30 million people. In France, a country of 66 million, women can receive a free abortion at any of its public hospitals.

This is not the most egregious misinterpretation of facts that an anti-choice senator has spoken recently. Last year Lindsey Graham made the unsupported claim that with abortion restrictions, “good things will happen. Babies will be born that wouldn’t have made it otherwise, and only God knows who they will grow up to be.” Graham makes this claim despite the personal experiences and studies that have shown time and time again that restrictions on abortion are dangerous to women.

The right wing of the Senate has stepped up its game when it comes to abortion restrictions. It is important for all voters, not just feminist voters, to question everything that a senator says to win an election. Scary, unsupported claims about abortion are the easiest way for the right wing to push centrist voters into their wing. In the weeks before the coming election, we must all think critically and carefully about who exactly has the ability to represent women and their allies in the Senate.