Women in Colorado, North Dakota, and Tennessee could find their access to abortion and reproductive health services severely restricted this November. In Colorado and North Dakota voters face a decision on  “personhood” initiatives which extend the rights of personhood to unborn fetuses by defining life as beginning at conception. These personhood amendments tend to have broad, vague language that affect not only abortion but could potentially extend to different fertility treatments and forms of contraception. 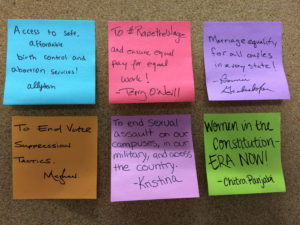 While Colorado’s initiative is very likely to fail, North Dakota is a notoriously anti-choice state with a history of restricting abortion access. These initiatives tend to be framed by anti-choice activists as protecting the health of pregnant women and the potential life of a fetus, but decades of research have shown again and again that abortion restrictions are dangerous to the lives of women.

Tennessee Legislative Powers Regarding Abortion, Amendment 1 is almost more expansive in potentially restricting abortion and contraceptive access to women. The amendment would give Tennessee’s Legislature the power to regulate abortion in any way it sees fit, and explicitly states that abortion is not constitutionally protected in Tennessee.

This would put Tennessee’s Constitution at odds with the current interpretation of the United States Constitution regarding abortion, and takes women’s health care decisions even further out of their own hands. This election holds several possibilities for taking women’s rights around reproduction away in several scary state initiatives.