On Saturday, September 29, the NOW National Board will be participating in the March for Black Women in D.C. and we’re inviting NOW activists to join us! NOW is an official sponsor and our very own Christian Nunes, National NOW Board member and Chair of the Board’s Racial Justice Committee will be speaking at the March For Black Women.

We stand in solidarity with the March for Black Women because black women have always faced innumerable personal and unspeakable brutalities. We cannot allow these travesties to continue and we must act to eradicate oppression whenever it shows up for black women and their communities. Activities will begin at the National Mall at 9:00 a.m. sharp! 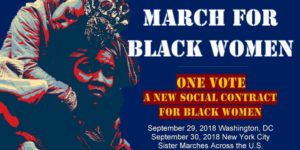 And there’s more! We’re also inviting NOW activists to attend the March for Black Women’s #VAWA Advocacy Day on September 28, on Capitol Hill, to advocate for the Violence Against Women Act (VAWA), which is set to expire on September 30, 2018. It is imperative that leaders on Capitol Hill hear from black women, femmes and their allies on the importance of this act. If you are interested, please sign up here.

Why do we march? Read the March for Black Women’s official demands:

Read the official statement about the March for Black Women

We hope you can join us. The time is NOW.