WASHINGTON — Today, April 2, is Equal Pay Day—marking the number of extra days into 2019 the average woman has to work to earn as much as men did in 2018. Last year, Equal Pay Day was calculated to occur on April 10—meaning that in 2019, women have improved the score by a mere eight days.

The U.S. economy has a structural flaw when it comes to women’s wages. When averaging data for all races, women take home just 80 cents for every dollar earned by men. White women, non-Hispanic women earn 77 cents as compared to men and the gender pay gap is even worse among most women of color.  According to U.S. Census data:

Although Congress enacted the Equal Pay Act in 1963, their work is far from finished. We need the federal Paycheck Fairness Act, to remedy its flaws and strengthen protections that ensure women are paid fairly through increased penalties and better reporting for wage discrimination, among other provisions. The bill recently passed the U.S. House of Representatives and we demand that the Senate schedule a vote on this crucially important legislation.

The gender wage gap puts an even greater burden on hard-working women and their families who are already struggling to keep up with monthly bills, health care, child care and an economy that too often leaves them behind. It even has an impact on the pension and social security earnings that women receive in retirement.

When the Equal Pay Act was passed, full-time working women were paid 59 cents on average for every dollar paid to men. Since then, the wage gap has narrowed by just 21 cents- a rate of less than half a penny a year. At the current pace, gender pay equity won’t be achieved until the year 2058.

Let’s move Equal Pay Day back where it belongs—to December 31. The earnings year should end with the calendar year—and not a day longer. The feminist agenda is rising–and so must women’s pay. 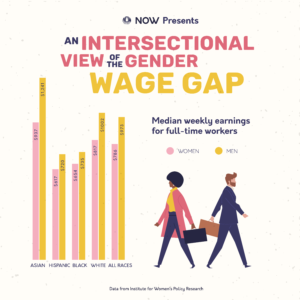