Background – Equal Pay Day, commemorated on April 4th this year, represents the approximate day that women must work to in the current year to make the same amount of money men did in the previous year. In other words, the equal pay calculation means that a woman must have worked all of one year and well into the next year to be paid what men were paid in one year alone. The gender-based wage gap represents a pattern that has existed over many years and reflects multiple barriers to equal pay, including gender- and race-based pay discrimination, segregation of women into lower paying jobs and exclusion from higher-paying nontraditional jobs as well as lack of workplace policies that make it difficult for women to care for families without suffering an economic penalty.

$10,500 Less Income  – The wage gap of 80 cents (rounded up from 79.6 percent) is the median earnings in 2015 (latest data available) of women full-time, year round workers as a percentage of the median earnings of men full-time, year round workers, according to the Current Population Survey, U.S. Census Bureau. The median earnings describe the pay for a worker at the exact middle of all workers (in a category), working at least 35 hours, and at least 50 weeks per year and include just the money people receive in their paychecks. The 20.4 percent gap represents nearly $10,500 in lower annual earnings for all women at the median – which accumulated over a 40-year working career is a huge loss in income.

Men Still Doing Better – A more recent calculation of the wage gap looking at 2016, looking at the weekly full-time earnings for women and men (all races, across all occupations), puts the earnings ratio (wage gap) at 81.9 – an increase of 0.8 percent over 2015. According to the Institute for Women’s Policy Research, women’s median weekly earnings for full-time work was $749 in 2016 compared with $915 for men. Controlling for inflation, women’s earnings increased by 1.9 percent and men’s earnings increased by 1.0 percent since 2015, but men still make significantly more.

NOW was the first women’s organization to publicize not only the traditional, all women’s Equal Pay Day, but also the dates that symbolize how much harder women of color must work to make the same as their male counterparts from the previous year. Continuing that conversation about the pay gap we now include the income inequalities which exist along racial as well as gender lines, recognizing multiple Equal Pay Days.

2017 Equal Pay Day Dates – The wage disparity in the U.S. persists not only between men and women but also varies considerably by race and this pattern has persisted over many decades. Although women (of all races) are paid $.80 for every dollar men (all races, across all occupations) are paid, the wage gaps for nearly all other major racial groups are dramatically wider. Only the Asian-American women’s wage gap is smaller – but many smaller sub-groups of Asian-American women have a much larger wage gap.  The wage gaps and Equal Pay Days noted below are based on calculations using 2015 median year ‘round, full- time earnings.

General Equal Pay – Use Any Time

Paycheck Fairness Act – Use Any Time

People are often more likely to click on something if it has an eye-catching graphic. Any of the graphics at the end of this tool kit may be used to accompany any/all of these Facebook posts.

Happy Equal Pay Day (if you’re a woman)! You have finally earned the same amount of money that men did in 2016!  It’ll be a few more months for women of color.

What is the gender pay gap and is it real? The complete guide to how women are paid less than men and why it can’t be explained away, http://www.epi.org/files/pdf/112962.pdf

The Gender Wage Gap by Occupation 2015 and by Race and Ethnicity, http://www.iwpr.org/publications/pubs/the-gender-wage-gap-by-occupation-2015-and-by-race-and-ethnicity

Status of Women in the States, http://statusofwomendata.org/explore-the-data/employment-and-earnings/additional-state-data/what-women-earn-by-race-ethnicity/

Women and the Lifetime Wage Gap: How Many Woman years Does It Take to Equal 40 Man Years? http://nwlc.org/wp-content/uploads/2017/03/Women-and-the-Lifetime-Wage-Gap-2017-1.pdf

The Simple Truth about the Gender Pay Gap (Spring 2017), http://www.aauw.org/research/the-simple-truth-about-the-gender-pay-gap/

The Gender Pay Gap by State and Congressional District, http://www.aauw.org/resource/gender-pay-gap-by-state-and-congressional-district/

To upload a graphic on social media, right click on an image below and click “Save image as…” 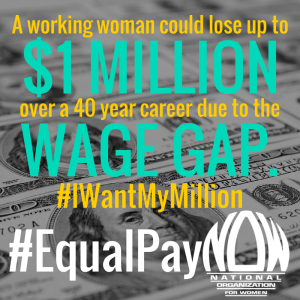 Suggested Tweet: The pay gap means
losing up to $1 mil over a 40-year career.
What would you do w/ YOUR $1 mil?
#EqualPayNOW #IWantMyMillion 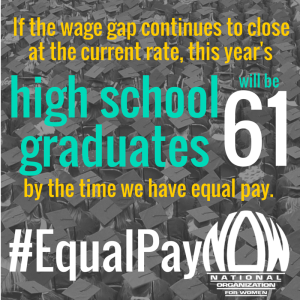 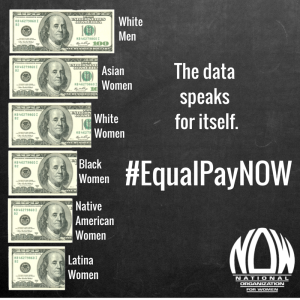