If the polls and pundits are right, voters who would likely support progressive, feminist candidates for U.S. Senate this year are more likely to stay home than right-wing conservatives.

We need to prove them wrong. 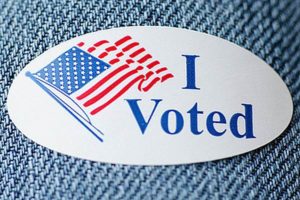 This election is critical — we must put the brakes on destructive anti-women policies and elect legislators who can provide urgently needed solutions. This means turning out to vote and encouraging our friends and family to do the same.

I know this is a challenge. Voters are fed up with the gridlock in Washington and are less and less inclined to see voting as a means to an end they care about. If Congress was a TV show, it would have been cancelled after a month. (If only…)

But we have to make the most out of the system we’ve got, and that means standing up to the right-wing PACs, the billionaires like the Koch brothers and the Ted Cruz wing of the Republican Party. They’re flooding the airwaves with ads designed to turn out the ultra-conservative base and engaging in the most cynical and undemocratic voter suppression tactics designed to steal elections they can’t win fair and square.

What you need to know is that the most important Senate elections are so close today that they could go either way. The final push in these next few weeks will mean the difference between Mitch McConnell being Senate Majority Leader or being the extremist who lost his re-election bid to Alison Lundergan Grimes. Or Scott Brown returning to the Senate in New Hampshire instead of Jeanne Shaheen winning a second term.

Or Kay Hagan holding on to her Senate seat in North Carolina, instead of falling to the architect of restricting access to abortion care, Thom Tillis.

NOW has four key issues for the 2014 mid-term elections:

Let’s go through these important issues one by one:

We need to keep and expand Social Security and Medicare benefits, secure equal pay for equal work, and raise the minimum wage.

There are 25.2 million mothers in the United States who work outside the home. In fact, women are the sole or primary breadwinners in roughly 40 percent of U.S. households nowadays. But most of the time, they aren’t paid fairly.

Women on average are paid just 78 cents for every dollar men make. That gender wage gap is amplified by race-based discrimination: For African American women, the ratio is about 64 cents, and for Latinas, it’s 59 cents.

If equal pay for women were instituted immediately, across the board, it would result in an annual $447.6 billion gain nationally for women and their families.

One reason for the gender wage gap is that women cluster in low-wage jobs. Women represent nearly two-thirds of minimum wage workers, and are about 70 percent of tipped workers (whose minimum wage is a miserable $2.13 per hour).

Women and their families need a livable wage — a wage that would allow them to save up for a down payment on a house, their kids’ college tuition, and their own retirement security.

Women’s rights supporters in Congress have introduced bills supporting equal pay, child care funding, paid family leave, pregnancy accommodations, and an increase in the minimum wage, but the Republicans in charge of the House have stymied every single one.

Do you know where your candidate stands on these issues? Ask! Then vote for the candidate who will support women’s economic security.

Providing access to affordable healthcare is key to women’s economic security. This includes provisions in the Affordable Care Act (ACA) like full coverage of birth control without copays or deductibles, and prohibiting outrageous practices like “gender rating” (higher premiums for women) and refusing coverage based on “pre-existing conditions.”

The ACA’s birth control coverage requirement is key to women’s health. Unintended pregnancy is deadly. It is strongly correlated with maternal and infant mortality, and is a significant risk factor for domestic violence homicide. Unintended pregnancies also strain family budgets and push women out of the workforce, keeping them from realizing their full potential.

About half of pregnancies in the U.S. each year are unintended, and for those women who carry their pregnancies to term (more than half do), the prognosis is anything but great. They not only experience higher rates of premature birth, but also are more likely to have inadequate prenatal care, low birth weight and small size infants, maternal depression and anxiety.

According to the Guttmacher Institute, every public dollar spent on contraception saves three dollars that would otherwise be spent on Medicaid payments for pregnancy-related and newborn care.

According to Save the Children, the U.S. has the highest first-day infant mortality rate of any country in the industrialized world. This is 50 percent more first-day deaths than all the other industrialized countries combined.

Politicians may try to separate out abortion, or abortion and contraception, from the continuum of women’s reproductive health care, but when they do, women’s lives are needlessly cut short. Whatever you call that, you can’t call it “pro-life.”

Marriage is recognized as a fundamental right in this country and, as such, it cannot legitimately be withheld from same-sex couples. We are dedicated to ensuring that lesbian and gay couples’ right to marry is legally recognized in all states and by the federal government.

With this week’s court action in Alaska, same-sex couples will now be able to legally marry in 30 states and the District of Columbia.

This represents real progress, but the fight is far from over. Find out which candidate supports full civil and human rights for lesbian, gay, bisexual, and transgender individuals — and vote accordingly.

According to the Brennan Center,

Since the 2010 election, politicians have pushed a wave of laws cutting back on voting rights. These restrictions range from new photo ID requirements to early voting limits to voter registration cutbacks. Overall, 22 states have new laws that could make it harder to vote, and 14 of them will have new restrictions in place for the first time in a major election this year. That means voters in nearly half the country could find it harder to cast a ballot in 2014 than they did four years ago.

Voter suppression is aimed at low-income and minority communities and women are disproportionately affected. Restrictions on early voting, for example, hurt minimum wage workers, two-thirds of whom are women, who usually can’t take time off to vote on Election Day. And women who change their name when they marry or divorce have been told they can’t vote because their driver’s license doesn’t match their birth certificate.

If Republicans successfully suppress the number of single women who vote, they will not have to be concerned about political consequences for their regressive and anti-woman legislative proposals.

Can you see why women just can’t afford to sit this election out?

That’s why I’m asking you to do two things today. First, make sure you vote in this election. If early voting has started in your state, get your vote in right away.

And second, call or email ten of your friends around the country, particularly in states like North Carolina, Kentucky, New Hampshire and Alaska, and make sure they do the same. All the emails in the world from party leaders, elected officials or campaign strategists won’t mean as much as a personal contact from you.

We need to change the face of the U.S. Senate. It’s the only way to finally start getting things done in Washington.

And in 2016, when we elect a feminist woman as president, she’ll have the allies she’ll need to enact her agenda.