Fighting to protect women’s access to safe and affordable reproductive healthcare has been part of NOW’s bread and butter since 1966.  Despite our best efforts, the right wing extremists have brought numerous reproductive justice setbacks in 2014.  While NOW activists and allies across the country will certainly continue to fight for reproductive justice in 2015, we are preparing ourselves for the worst.  Now that conservatives have control of Congress, we can expect more TRAP laws, more religious exemptions, and the 20-week abortion ban to rear its ugly head once again.  Knowledge, however, is power – and the first step to combating these injustices is to learn more about them.

Targeted Regulation of Abortion Providers laws, also known as TRAP laws, are infamous attempts to restrict a woman’s access to abortion – basic healthcare for women.  Proposed under the guise of protecting women’s health and safety, these policies place medically unnecessary restrictions on facilities and physicians that provide abortions.  Instead of protecting women, these regulations dramatically reduce the number of eligible abortion providers and facilities.  TRAP laws are rampant in many states across the country.  In fact, as of December 1, 2014, 24 states have TRAP laws that apply to not only abortion facilities, but abortion providers as well.  Additionally, 22 states have TRAP laws dictatin 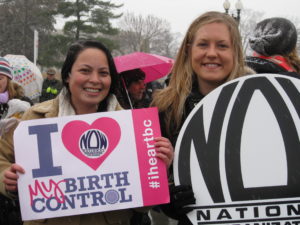 g medically unnecessary specifications to abortion facilities, and 14 states have TRAP laws mandating unnecessary requirements for abortion providers.  TRAP laws come in all shapes and sizes, such as bans on types and times of abortion and mandatory ultrasound laws.  With an alarmingly large number of anti-choice politicians in control of Congress and State Legislatures, we expect to be fighting new TRAP laws and working to repeal old TRAP laws all year long.

2014 seemed like the year of religious exemptions, with Burwell v. Hobby Lobby as the crowning jewel.  From Arizona to Michigan, we continuously saw the civil liberties and human rights of thousands denied in the name of “religious freedom”.  Both women and the LGBTQIA community have been particularly harmed by these types of policies.  In this summer’s Hobby Lobby decision, for example, the Supreme Court ruled that the religious beliefs of one family could deny thousands of women access to birth control – basic, necessary healthcare for women.  The Court cited the Religious Freedom Restoration Act (RFRA) as a foundation for their discriminatory decision (side note: in case you missed it, be sure to read Justice Ginsburg’s amazing dissent!).  Many predict that state-level RFRA’s will run rampant now that conservatives control both Congress and many State Legislatures.

Last but not least, we are waiting with baited breath for Senate Majority Leader Mitch McConnell to re-introduce the infamous 20-week abortion ban.  This bill represents the most restrictive abortion legislation over the past decade and is a clear violation of Roe v. Wade.  Furthermore, it places the health and well-being of women in the hands of ideologues more interested in politics than women’s lives. By banning abortion after 20 weeks and cutting funding to necessary social safety nets, among other policy decisions, the right-wing extremists in Congress threaten to continue to endanger the lives of women across the country. These expected attacks on reproductive justice will certainly make for a busy 2015 – not to mention the attacks on economic justice, racial justice, LGBTQIA justice, constitutional equality, and combating violence against women.  Good thing we already have a plan in place to fight for women’s rights in 2015!  Click here to join us.

2 responses to “TRAP Laws, Religious Exemptions, and the 20-Week Abortion Ban – Oh My!”