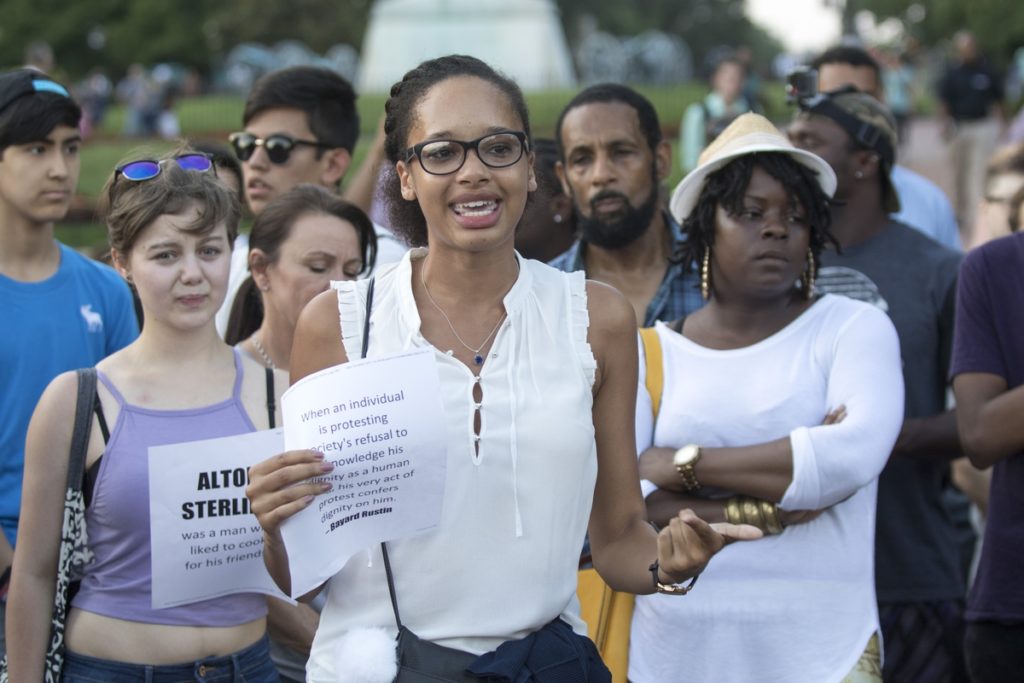 Wobbly and unsure on her feet, my mom leans with one hand on her walker while the other points to the large pink button on her chest. The button reads, “This is what a feminist looks like.” I had given the large button along with a few others with feminist quotes to her for her birthday. By wearing the button, which she dutifully pins to her chest everyday, she breaks stereotypes. Not many people look at disabled Black women and think: “feminism”. But she wears her button proudly. I then turn to my father and ask, “Are you a feminist?”

He nods his head and says, “I became a feminist when I had two daughters and realized that gender inequality is a real thing in the workplace,”

I nodded my head, but also knew in my mind that this was untrue. My dad had spent his life researching racial disparities in policy and the prison industrial system. For years he wrote about how Black men’s bodies are criminalized, and how it affects families and communities. He would write racism, but in actuality the criminalization of Black men’s bodies comes from racism and sexism. From reading his work from the seventies and eighties, I know that he has been a feminist long before he called himself one. For years Critical Race Theorists, Civil Rights activists, and more would not call their work “Feminism” because of the assumed meaning that feminism only fights for women’s rights.

And although the majority of feminist activism does fight for women’s rights. The true meaning of feminism is to fight against sexism and oppression, which effects everyone. When young boys have sex with their teachers in middle schools, feminist activists call it rape. It was feminist theorists who began to tell boys that accepting kindness and being loving is not emasculating, and that “man up” does not equate to inflicting violence. These are feminist issues. The many men and women who raise these issues are feminists, even if they do not see themselves as such.

When someone says “Feminist,” usually the image of a white, privileged, cis-gendered heterosexual woman comes to mind. This stereotype of the typical feminist is becoming increasingly untrue (also historically there were plenty of folk outside this stereotype that held feminist ideals even if they did not call themselves feminists.) Take a quick look at Twitter and the folk who claim Feminism, and you will see that men, transfolk, women of color, presidents, and even my parents claim Feminism.

The stereotype of what a feminist should look like is harmful because it creates an untrue narrative of what feminists fight for. Feminists fight for equality of the sexes. Whatever equality looks like for them. For many People of Color, and others, this also means fighting for racial equality. And by seeing feminists and feminism as a two-dimensional concept that only incorporates a singular view, we disregard the many brilliant and inspirational people who are doing feminist work.

My feminism means fighting for racial justice as well as gender equality. I am a Black woman from Minnesota. On July 7th, 2016, I woke up with my home state in the news. I woke up and saw a Black man, Philando Castille, being shot on a road I’ve driven on before, with a four year old Black girl and a Black woman also in the car. My first reaction was not surprise. I am no longer surprised when horrific acts of violence are perpetrated by police officers against men of color only to be broadcast to the world. But I am pained. I feel my eyes tear up. I feel my mood darken.

And I remember the last time my state made headlines, it was for being the best state in the country to live in. The truth, which I’ve known for a while, is that Minnesota is a great state to live in if you are White and Christian. Minnesota has a real race problem. It has one of the highest disproportionate shares of Black folk in prison in the country. This is a sexist problem as well as racist because as we know, Black men aren’t inherently more violent or criminal. But still white police officers believe they are. Black children have the highest drowning rates in the country, and are more likely to drown in my state than be shot. Black students in the state are consistently failing in our school systems, many dropping out at some of the highest rates in the country. Islamophobia and xenophobia against the Somali population is obvious. Also many of the women and children who have found refuge in the state suffer from PTSD and often don’t get the help they need to thrive, because they are seen as temporary guests. These are never things that are considered in the articles on which state is best.

The policies that are in place, put Black bodies in prison. These are sexist policies as well because they rely on stereotypes that are linked to sex and gender. Black skin is not on trial here, but Black bodies are. Being Black in Minnesota is being invisible when it comes to how people make laws and who they are looking at to help, but being hyper-visible in the eyes of law enforcement as a threat, as criminal, as dangerous.

When the word “inclusive” was used in my privileged, predominately white high school, the inclusion was for the LGBTQIA community, not for the students of color. Often issues revolving around LGBT rights and feminism were only linked to white skin and the obstacles that White women faced or White Queer folk faced. And these conversations are important. But the conversations never got far enough to think about Women of Color or Queer People of Color. Our pain and our complexities are invisible in Minnesota. The most common phrase that I heard growing up was that we were the dirt, the shit, the dark hole in the never ending land of snow. If you can imagine that image, you will understand the isolation and the hyper-visibility of what it is like to be Black in Minnesota.

I remember when a cop car slowed to a stop when I was walking down a cold Minneapolis street. My heart raced and although I was doing nothing wrong, all the laws I could be expected to break were on my mind. My throat was dry and I could feel myself holding back tears while I answered the policeman’s questions. “How old are you?” “What are you doing out on this street at this time of night?” It was ten and I was walking from my boyfriend’s house to where I had parked my car. “Oh where does your boyfriend live?” It was then, with the disgust rolling off his body that I knew what he saw. He didn’t see an ambitious, high- achieving, varsity swimmer, sixteen-year-old girl in her first relationship. But rather someone more sinister, who didn’t deserve to walk the streets of Minneapolis. If I told you what I was wearing, would you believe my innocence? Long johns, jeans, ugg boots, and a large puffy jacket couldn’t disway his suspicion. Plenty of people passed me. All of them White. All of them stare, but none of them made eye-contact.

This is what it is like when the intersection of racism and sexism play on your skin. And thinking back I wonder, why couldn’t that police officer see a feminist? This would happen more and more as I got older, as my body changed. And as I got older I realized more and more, why I needed feminism, and why fighting just racism or just sexism was not enough. Because when I walk into a room, people do not see just a Black person, or just a woman; they see a Black woman. And because of this, there has never been a time or case when I just felt like a Black person, or just a woman. I do not know what those two things are separately. But feminism fights for me, my Black womanhood, and everything that means or doesn’t mean.

For years women in the Feminist movement and NOW have fought to be heard. “Women’s work” and “women’s issues” were invisible to the public fifty years ago. The work that NOW and other feminist organizations have done for women is tremendous. But historically the women who profited from feminist organization’s work have been White women. In the LGBT community, feminist and LGBT rights organizations have done so much work on the issues that affect White folk in that community, but not focusing on the fact that Black Trans-Women are the poorest group in our country, and are the most likely to face violence and harassment. Even in movements that were supposed to create equality for everyone, People of Color have fallen by the wayside. Told to choose a cause and shut up. Told that others need to win first in order for everyone to win. This was shown to be untrue.

Black women were the ones who pioneered a new meaning of feminism. An intersectional feminism, that truly fights for everyone. NOW in the last few years changed its mission statement to not only include this feminism, but to make it one of the core tenets of the organization. Feminism fights, as renowned feminist theorist bell hooks states, “sexism, sexist exploitation, and oppression.”

Sexism doesn’t just hurt women, but it hurts men by stereotyping men as killers, specifically Black men as killers and demonizes them. Sexism is already an intersectional oppression. It has affected folk in different ways and on different layers of oppression and privilege. If we are truly fighting for all people to be equal then we must also fight on multiple fronts. We can’t forget, Black women and Black transfolk are being killed too. We must fight sexism, racism, transphobia, ableism, classism, and more. As bell hooks writes in the very first line of her book, “Feminism is for Everybody,” “Simply put, feminism is a movement to end sexism, sexist exploitation, and oppression,” Because of the history of racism Black men have been turned into uncontrollable demons that need to be shot down. Latina women have been turned into one dimensional sexual objects who can’t say no, even when they’ve said no. The undeniable factor of sexism is deeply entangled in racism. So if we truly want to fight ALL sexism, we also have to fight racism.

This all brings me back to the Thursday morning that I woke up with my home in the news. That morning I thought, how could someone mistake a man with a four year old girl in the back seat as threatening enough to shoot, threatening enough to kill? How, if not by seeing the man’s sex and race as indicators of difference that brought about fear? Sexism and racism are what turn twelve year old boys who are playing on a playground into dangerous men then into lifeless bodies. Sexism and racism is what brought me to a protest that Thursday night, pounding on NOW signs, yelling and screaming, “No Justice, No Peace,” and “Black Lives Matter.” Because if we truly are going to fight sexism, and if we are truly going to achieve the goals of Feminism and equality, this is what a feminist needs to look like.

9 responses to “This is What a Feminist Looks Like: Fighting Racism and Sexism Within the Feminist Movement”