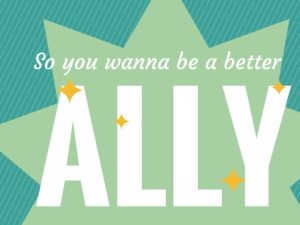 I have privilege, and I have a lot of it. As a white, cisgender, upper-middle-class, able-bodied woman, I have a lot of advantages in society that other groups do not. Because of this, I am continuously striving to be a good ally to groups to which I do not belong. (I’m not perfect at this, but that’s what this post is all about.)

Most people have some type of privilege that comes with  one or more of their identities. Though privilege in one area/identity does not negate oppression in another, it does mean that you can and should be an ally to the people in other minority groups.

Being a good ally is not as simple as some think, and you don’t get to automatically call yourself an ally to a certain population. The only people who can define who is an ally is the people from that group–otherwise you get a lot of “allies” defending their own offensive behavior because, don’t worry, they’re “allies.”

On that same note, only people who are part of oppressed groups can define the problems and solutions on which they want to act. People outside of those populations cannot decide the best ways to support or fight for the group.

So, for example, if I want to be an ally to people who are transgender or gender non-conforming, I shouldn’t tell them that if they want abc, they should do xyz to achieve it. I should instead ask them how they want to fight for their own justice and equality and what role I can play to help them achieve their goals. However, I also should make sure I’m not getting all my information only from them, and placing all the responsibility on them–the only person responsible for my education and knowledge is myself.

For some awesome tips on being a trans ally in particular, you can go here.

What about men in feminism? Are they “allies” or are they feminists?

That depends on who you ask, really, and the communities of which you’re a part. There are some feminists who believe that (cis) men can only be “pro-feminist” or allies to the feminist movement, and that (trans and cis) women are the feminists. That point of view should be respected.

Others believe that (cis) men can and should be feminists, since they are hurt by patriarchy, as well (though to a much lesser extent than women). For more information on this issue in particular, there’s a wonderful article on Everyday Feminism that you can read.

3 responses to “Being a good ally is an ongoing process”