The Offense: In a July 2 cover story, the New York Post attempted to discredit the woman who was allegedly raped by Dominique Strauss-Kahn by labeling her a prostitute. The cover screams “DSK MAID A HOOKER” in huge type. Inside, writer Italiano provides very little beyond gossip, depending heavily on puns such as “big tips for extra turndown service” to convey this completely unsubstantiated accusation.

NOW’s Analysis: Italiano jumps right into the piece, claiming that the 32-year-old mother and alleged rape survivor “wasn’t just a girl working at a hotel — she was a working girl.” 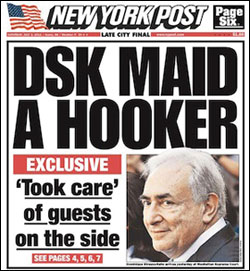 Throughout the article, Italiano’s harsh rhetoric and unsupported accusations portray the accuser as a “pathological liar and scam artist” willing to do anything for quick cash. Based on quotes from an unnamed source, the accuser supposedly had been “getting extraordinary tips . . . And it’s not for bringing extra f–king towels.” With no evidence, the reader is meant to align the accuser’s income with prostitution. After all, how else would this hotel maid be able to pay for her “hair braiding” and “salon expenses?”

The case for prostitution continues as Italiano’s source speculates that the accuser’s union “purposely assigned” her to such a high-class hotel because “it knew she would bring in big bucks.” Recently, The Washington Post revealed that the union in question actually sent the New York Post a packet of documents on the accuser, including a copy of an employment application she filled out at the Sofitel, in which she listed the International Rescue Committee (not the union) as the source that referred her to the hotel.

There are countless problems with this article, two of which should greatly concern feminists. First, claiming (with no evidence and only one anonymous source) that an immigrant woman working as a hotel maid is actually a “hooker” is sexist, racist and classist, to say the least. Second, implicit in this accusation is that a prostitute cannot be raped, or that any claim she makes of being raped should not be taken seriously. Even the New York Post should be held to a standard that says promoting harmful stereotypes and demonstrating such blatant misogyny are unacceptable.