Join the National Organization for Women in Washington, DC, as we march in the Women’s March to achieve equality. 2018 challenged our movement in myriad ways, but we rise, in 2019, as strong and unified as ever. Our dedication to the Women’s March and the principles of unity that it represents is unwavering.

On January 19th, NOW marches for the Equal Rights Amendment (ERA). NOW will not rest until women achieve full equality, first in the constitutional protection of the ERA, and then across society in every sphere: social, economic, and judicial. We need your help, in DC, to help publicize and gather support for the ERA.

JOIN US! Please fill out this online form to let us know whether you are attending the DC march, a local march or not attending this year.

If attending in DC, you are invited to join NOW in the following ways:

Stop by the NOW office (1100 H St NW, Suite 300, Washington, DC 20005) any time between 1 p.m. and 7 p.m. to pick up signs and clipboards (we’ll be collecting signatures of support for the ERA). We’ll have light refreshments available.

Join us at the NOW office any time between 8 a.m. and 9:45 a.m. for coffee, a light breakfast, and camaraderie before we head out to the March gathering site. 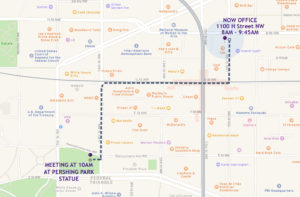 We’ll have signs, clipboards, energy bars, and bottled water to keep you energized before we head out. Our office is located slightly more than half a mile from the March gathering site.  We will plan on heading out to the gathering site around 9:45 a.m.

If you can’t make it to the NOW office before the March, meet us at the NOW meeting point at John J. Pershing statue, Pennsylvania and 14th at 10 a.m. 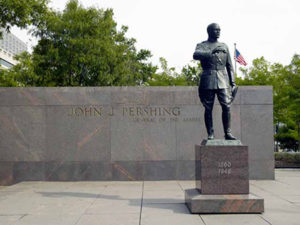 Are you attending the Women’s March? Fill out this online form to let us know and to RSVP to the NOW activities in DC.

NOW has always had a strong presence at the Supreme Court around the anniversary of Roe v. Wade, January 22.  At forty-six years since that landmark ruling, we are facing the most serious threat yet to Roe with two more abortion rights opponents appointed to the Supreme Court, Justices Neil Gorsuch and Brett Kavanaugh, likely making it a majority to reverse the ruling.  There are 13 separate cases in the lower courts targeting Roe and women’s access to health care ready to move to the Supreme Court. Also, it appears likely that Donald Trump’s nominee for attorney general, William Barr, who once said in a 1992 CNN interview, ”that Roe will ultimately be overturned” may be confirmed.  Barr, who personally opposes abortion rights, served as attorney general under President George H.W. Bush and his nomination for a second stint as AG is currently pending in the Republican-controlled Senate. NOW has signed a coalition letter to the Senate opposing Barr’s confirmation.

Roe Day observances sometimes take place while opponents of women’s abortion rights hold their annual March for Life; attendees to their events are usually thousands of Catholic high school students that are bussed to D.C.  NOW will be joining allies at the Supreme Court, 1 1st St. NE, on Friday, 12 p.m. to 2 p.m. and, with Feminist Majority Foundation, will participate in a Counterprotest. NOW folks can meet at the NOW office to pick up signs for the Counterprotest.

Space is limited so make sure to reserve your spot! Go to,

Also of interest: there will be a Lobby Day sponsored by the Women’s March partners on Friday, January 18. Citizen lobbyists will focus on parts of the Women’s March Agenda which is being finalized and will be available next week. A Lobby Training will start at 11:30 a.m., followed by visits to Congressional offices until 4 p.m. Location of the Lobby Training has not yet been announced, but we will let you know as soon as we know. Packets with informational materials will be provided to all who attend. Please sign up to attend the March and indicate that you would also like to participate in the Lobby Day on Friday, https://www.womensmarch.com/2019/