The Offense: Marc Ecko’s “Cut and Sew” clothing line for men is promoted through the use of celebrity Lindsay Lohan, seen in provocative sketches and online fantasy scenarios. 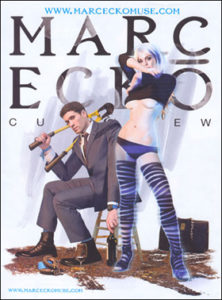 NOW’s Analysis: The print advertisement catches your attention with a realistic looking drawing of Lindsay Lohan pulling off her top while a man in a suit sits behind her holding a large bolt cutter tool. The purpose of the ad is to get you to go to the website, where you are greeted by another exploitative image of Lohan, this time wearing a ski mask and sitting on a stool with her legs spread open.

The basic concept of the website is that the male visitor should imagine himself in various scenarios where Lindsay Lohan serves as his “muse.” These fantasy situations involve Lohan cutting off parts of her clothing, rolling around on a bed while “you” take pictures of her, and so on. (The actual clothing line is immaterial to these situations.)

Instructions on the website allow you to print out a “hologram glyph image” of Lohan that will “come to life” when a webcam is pointed at it. You are encouraged to “interact” with the image and record it for playback and sharing on the web. The site also includes behind the scenes video of the shooting of Lohan’s “muse” images.

To say that this voyeuristic website is creepy is an understatement. This campaign is a striking example of what it means to sexually exploit, objectify and commodify women. That it incorporates the identity of a troubled young woman celebrity makes it even sadder.

Take Action: Contact Marc Ecko Enterprises and tell them what you think of the “Lindsay Lohan Muse” promotional campaign.