Media Outlet: On the Internet

The Offense: Burger King has posted a website called “Singing in the Shower” — which bills itself as “The World’s First Guilt Free Showercam.” 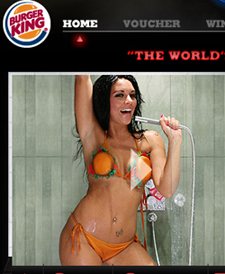 NOW’s Analysis: OK, burger joints, we get the idea. You’re desperate to round up young male customers, and you’re not above using the most unoriginal and exploitative tricks in the book. Now Burger King’s UK website lets you: “Watch our shower babe shake her bits to the hits at 9.30am every morning.”

This involves a woman in a bikini — with burgers strategically placed on the top half and bottoms that say “check out my buns” — who gets in the shower and starts soaping up, singing and posing. The video is clearly shot to imply that this woman has no idea she is being watched. If that’s not creepy enough, the song she’s singing is “I Think We’re Alone Now.”

With this voyeuristic promotion, Burger King is coming dangerously close to endorsing criminal activity. Haven’t they heard about what happened to ESPN reporter Erin Andrews? Or do the fellas down at Burger King think stalking is cool?

Worst of all is that this type of juvenile ogling seems to be aimed at young men, even boys. The site does require visitors to confirm that they’re 18 before entering, but it’s pretty simple to put in any birthdate you want — who’s gonna know the difference? Teaching kids that objectifying women and invading their privacy is fun — thanks Burger King!

Take Action: Tell Burger King what you think of their sexist website.