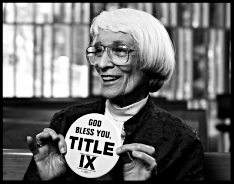 Bernice Sandler, who passed away January 5 at her home in Washington, D.C., was widely known as the “Godmother of Title IX.”  After earning a doctorate at the University of Maryland in 1969, she applied for one of seven teaching positions in her department but was told that she wouldn’t be considered for any of them.

“Let’s face it,” a male colleague told her.  “You come on too strong for a woman.” When she applied for another position, the researcher in charge of hiring said he didn’t hire women because they stayed home too often to care for sick children. Later, an employment agency dismissed her as “just a housewife who went back to school.”

Bernice Sandler then embarked on a lifelong mission to change the culture of sex discrimination on college campuses. She spent decades documenting, investigating and working to change the arbitrary limits and sexist standards that held women back academically and professionally. Her work led to the passage in 1972 of Title IX, the landmark legislation that banned sex discrimination in federally funded educational institutions.

Bernice Sandler was inducted into the National Women’s Hall of Fame in 2013 when she was lauded for her efforts that led to the first federal investigation of sex discrimination on campuses.

Bernice Sandler was an inspiration to countless women who were inspired by her example and empowered by her accomplishments.  She will be missed but never forgotten.