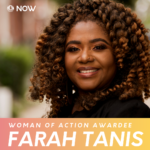 A dynamic speaker, organizer, author and curator, Farah Tanis is one of the ultimate movement makers. She is an international feminist and human rights activist who co-founded the Black Women’s Blueprint, which envisions a world where women and girls of African descent are fully empowered. She also curates of the Museum of Women’s Resistance, which examines the diversity, dynamism, and influence of women of African descent and women of color from the Global South. Among many other leadership roles, she is also a teacher and organizer in both the U.S. and the Caribbean and was a 2012 U.S. Human Rights Institute Fellow. 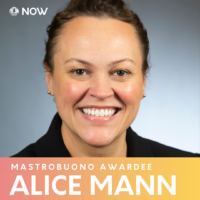 Dr. Alice Mann is the only physician currently serving in the Minnesota House of Representatives. Her defeat of a two-term Republican incumbent in 2018 helped Democrats take back the majority, and since her election she has made health care reform a top priority. She decided to run for office after working at a Syrian refugee camp in Greece and helping with recovery efforts in Puerto Rico after Hurricane Maria. Those experiences, combined with Donald Trump’s election, motivated her to run for office.“I think I’m part of this wave of women who are tired of sitting back and letting things happen to them,” Dr. Mann said during her campaign. Dr. Mann has been the primary author on 22 bills and co-authored another 135 bills, many of which have centered around issues of health, and women’s health. 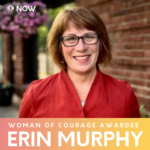 A registered nurse and health care advocate, Erin Murphy is former Majority Leader of the Minnesota House of Representatives and a member of the Minnesota Democratic–Farmer–Labor Party (DFL). She previously served as legislative director for former Minnesota Attorney General Hubert Humphrey III. In 2018, Murphy ran a passionate, joyful and game-changing campaign for governor of Minnesota and won the crucial endorsement of the DFL party. Not only was the majority of her staff female, but they were the first campaign in Minnesota history to unionize–a move fully supported and endorsed by Murphy. After securing the DFL nomination, she added State Representative Erin Maye Quade to her ticket, making theirs the first all-female ticket in Minnesota gubernatorial history to be endorsed by a major party. Before entering politics, Murphy served as executive director of the Minnesota Nurses Association and as an operating room nurse at the University of Minnesota Medical Center. 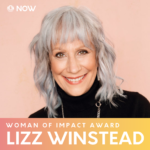 Known as one of the top political satirists in the country, Lizz Winstead is a comedian and radio and tv personality. A native Minnesotan, Winstead is a co-founder and former correspondent of The Daily Show and creator of Abortion Access Front, a satirical vehicle that uses humor and pop culture to push back at the many efforts rolling out across the country to undermine women’s access to reproductive health care. Winstead is co-founder of Air America Radio, and has helped to change the very landscape of how people get their news. Her forthright humor has been recognized by all the major media outlets including the New York Times, the Washington Post, O Magazine, and as Entertainment Weekly’s “100 Most Creative People.”

Winstead’s first book, Lizz Free or Die: Essays, was released in 2012 to incredible reviews, with Ms. Magazine saying, “Lizz Winstead is a sharp-witted truth-teller, and Lizz Free or Die will inspire anyone who has ever talked back to the television or wished they could come up with satire as insightful as The Daily Show.” 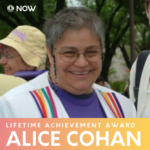 NOW is proud to announce that Alice Cohan is the recipient of the Lifetime Achievement Award at the 2019 National NOW conference: Feminist Agenda Rising, Our Time is NOW. The conference will be held in Minneapolis-St. Paul, July 19-21. Registration for the conference is available here. Alice Cohan, the current political director for Feminist Majority Foundation, has been a dedicated feminist activist throughout her life. She is nationally recognized for her expertise in field organizing, mass mobilizations, and working with law enforcement, and is extraordinary in her fearless commitment to feminism. Throughout her life, Cohan has furthered our shared feminist agenda by helping to elect feminists to office and push the ERA forward. Alice Cohan formerly served as NOW’s political director and Chief Field Director before joining Feminist Majority as Political Director. She has organized some of the largest mass mobilizations and marches in the country, including the record-breaking 2004 March for Women’s Lives that brought over one million supporters to Washington, D.C. 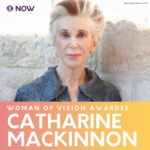 Catharine A. MacKinnon is one of the most innovative and prolific legal scholars and feminist theorists of our time. Her original work on sexual abuse as sex inequality in areas such as sexual harassment, rape, pornography and prostitution have been the foundation for influential laws, regulations and social movements around the world. MacKinnon created the legal claim for sexual harassment as sex discrimination that would become legal precedent for the courts. Her 1979 book, Sexual Harassment of Working Women: A Case of Sex Discrimination, argues that sexual harassment is actionable under Title VII of the Civil Rights Act of 1964 and any sex equality law. She was co-counsel in the case that established this in the U.S. Supreme Court, and her books on legal and political subjects are among the most frequently cited in the English language today.

With Andrea Dworkin, MacKinnon conceived the civil rights approach to pornography, based on its proven harms to women, and she proposed the Swedish model on prostitution in 1990 that has now been adopted in eight countries. MacKinnon’s case for Bosnian and Croatian women was the first to establish rape as an act of genocide. She regularly practices and consults with the Coalition Against Trafficking in Women (CATW) and is also a key collaborator with the ERA Coalition. From 2008 to 2012, MacKinnon served as the first Special Gender Adviser to the Prosecutor of the International Criminal Court (ICC), and in 2014 was awarded the Lifetime Achievement Award by the Association of American Law Schools (AALS) Women’s Division. She is the author of 13 books, more than 100 articles, is tenured at the University of Michigan Law School and is a long-term visiting professor at Harvard Law School, where she teaches. MacKinnon is one of the most significant figures in feminism. Her work has improved the lives of millions of women.