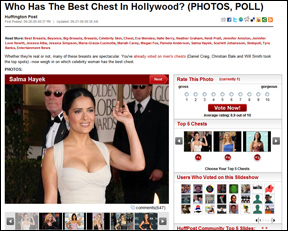 NOW’s Analysis: The Huffington Post exposes its tabloid side in this cheesy and insulting poll. Readers are invited to look at photos of women celebrities in which their breasts are prominently featured and then rate them on a scale of 1 to 10, where 1 is “gross” and 10 is “gorgeous” — seriously, this is not a joke.

Yes, the Internet is full of this kind of exploitative, sexist junk, but shouldn’t we expect better from the Huffington Post? The website links to a previous contest where readers voted on men’s chests, but that’s just a little different, don’t you think? Women are constantly judged and rated on their physical assets and sex appeal, and the Huffington Post really doesn’t need to be in the business of encouraging this practice. Not to mention, how old was the grade school boy who devised the rating scale? The use of the word “gross” is so degrading and juvenile that the folks at Huffington Post should be embarrassed.