Right now, the possibility of success is just a gleam in the eyes of women’s reproductive health advocates, but the recently re-introduced Women’s Health Protection Act of 2015, H.R. 448/ S. 217– if it were to become law – would help overturn hundreds of restrictive abortion laws that have been passed in recent years. If adopted and signed into law, H.R. 448 would make abortion services more accessible in all 50 states – plus the District of Columbia, Puerto Rico and any territory or possession of the U.S.

Sponsored by Rep. Judy Chu (D-Calif.) (with 87 co-sponsors) and Sen. Richard Blumenthal (D-Conn.) (with 32 co-sponsors), the legislation recognizes in its opening declaration that “Access to safe, legal abortion services is essential to women’s health and central to women’s ability to participate equally in the economic and social life of the United States.” 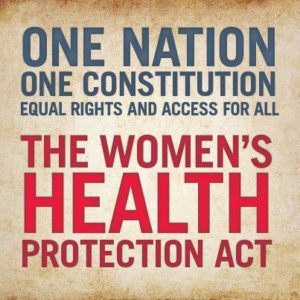 Unfortunately, at the federal level the Women’s Health Protection Act has little chance of passage in the 114th Congress which is controlled by Republicans who oppose abortion rights. There may be an opportunity for the legislation to get a fair hearing in the next Congress, beginning in 2017 when we expect that Democrats may again resume control of the Senate. But we are probably stuck with Republican control of the House at least through the 2020 Census and subsequent related re-apportionment and re-districting activities which in 2010 built Republican majorities in Congress and many states.

Activists Can Promote Women’s Health Protection Act at State Level – For the present, state-level advocates for women’s reproductive rights can look to H.R. 448/S. 217 to provide a model for their state to overturn all limitations on abortion services, giving women back the ability to make private, medical decisions regarding pregnancy and to obtain abortion care.  Hopefully, our activists can work with state legislators who support women’s abortion rights and will introduce and take the leadership in passing legislation similar to the Women’s Health Protection Act.

In the meantime, we must confront the wave of anti-abortion rights bills being promoted in Congress and state legislatures. There have been 231 measures that restrict abortion care adopted since 2010 – the year that mid-term elections put abortion rights opponents in power in state capitals. The overall total at the state level for the past 20 years is shocking at 835 restrictive provisions having been adopted.

There are now 25 state legislatures that are controlled by Republicans committed to limiting women’s reproductive rights. Many of these legislators were elected minimizing or hiding their opposition to abortion rights and even to contraception. With abortion rights opponents in control of Congress, there will be multiple attempts to push restrictive legislation; already the House has passed the harmful No Taxpayer-Funding of Abortion Act (H.R. 7) on the Roe anniversary day, Jan. 22.

What the Law Would Do – The solution to stopping this avalanche of restrictive laws is the Women’s Health Protection Act:  if adopted into law it would forbid any government from enacting legislation that seeks to do the following:

Enforcement of the Women’s Health Protection Act is facilitated by giving authority to the Attorney General to begin a civil action for injunctive relief on behalf of the United States against any government official that is charged with implementing or enforcing any restriction unlawful under the act. And, there is a private right of action for any individual or entity as well as a health care facility or medical professional to seek injunctive relief, with the court awarding the costs of litigation and attorney fees to the prevailing plaintiff.

For More Information – Text for the bill before Congress can be found at www.congress.gov – just enter either of the bill numbers and H.R. 448 or S. 217 will appear.  Activists can make contact with state legislators known to support women’s reproductive rights, provide them with a copy of this bill, and ask if they will introduce a version in their state legislature.

Incidentally, an excellent source of information on your state and its record on women’s reproductive rights can be found in the annual report, Who Decides?  The Status of Women’s Reproductive Rights in the States (January 2015) at http://www.prochoiceamerica.org/government-and-you/who-decides/