Overview – This packet includes ten fact sheets about federal legislation that is important to NOW because they would have a significant impact on women’s lives. The sheets contain bill numbers, similar or identical bills in each the House and Senate, a description, where the bills are in the legislative process, and their importance for women and their families. These fact sheets were updated March 24, 2016. More detailed information can be found here.

The Legislation – The fact sheets are organized into four categories: Reproductive Rights and Justice, Economic Justice, LGBTQIA Rights, and Constitutional Equality. NOW supports each of these bills except for the Pain-Capable Unborn Child Protection Act – which should be defeated. Some of these bills may not make not make it to a vote this Congress (114th), but it is important that your members of Congress are made aware that NOW activists want to see most of these bills adopted. The next Congress, beginning in January, 2017, may be more supportive of these bills.

To build support for our legislation, it is critically important that more feminists are elected to Congress. You can do your part in helping feminist women and men get elected this season. NOW’s PAC page contains an ongoing list of our endorsed candidates, and it will be a great boost to have a feminist woman president!

Lobbying Action Plan – A guide has been included at the end of these fact sheets to help create an action plan that works best for you. NOW encourages all its members and supporters to learn about these bills and take action to contact your two senators and representative asking them to co-sponsor the bills, take a leadership role in getting them passed, and/or to vote in support.

Your senators and representative will be in the district during this election season, presenting a great opportunity for NOW activists to lobby them. Please take these one-pagers with you when you meet with representatives or call their offices. Congress will be in session far fewer days this election year, so advocates need to pressure them to take up these important bills. If direct lobbying is not possible, NOW encourages activists to write letters or call their representatives citing information in these fact sheets. Including a personal story or information about how the bill would affect you or someone you know can be very effective.

Summary: The EACH Woman Act ensures affordable abortion coverage and care for women (in effect, repealing the Hyde Amendment which prevents federal funds being used to provide abortion care). Summary: This act counters many common TRAP laws (Targeted Regulation of Abortion Providers) and prohibits any government from imposing them on abortion providers.

What it does:
Prohibits the following: 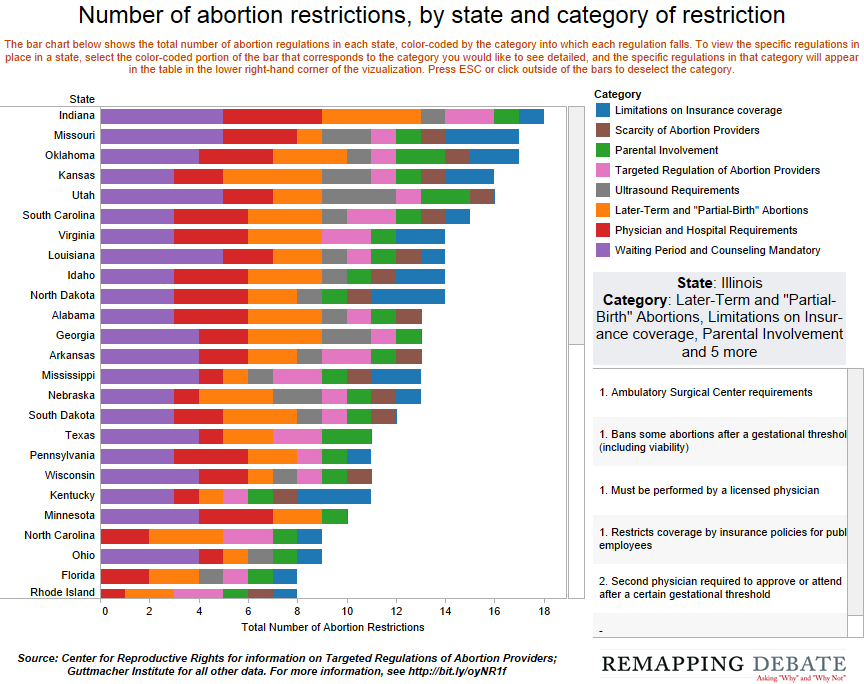 This is a great tool produced by Remapping Debate. It allows you to click on your state and see what restrictions are in place, how many, and how your state compares to others.

Summary: The bill seeks to amend Title IV of the Social Security Act to address the increased burden that maintaining the health and hygiene of infants and toddlers places on families in need who often cannot afford diapers, which results in adverse health effects on children and families. There are limited child care options available for infants and toddlers who lack sufficient diapers, a need which often prevents their parents and guardians from entering the workforce. Summary: This act seeks to ban abortion after 20 weeks except in the case of incest and rape (only after counseling, a two day waiting period, parental consent if the person is a minor, a police investigation, and it has been filed on person’s and doctor’s record), or due to an injury excluding psychological or emotional damage. This legislation could come up soon in the Senate and we want to make sure it does not pass! Congress Rejected A 20-Week Abortion Ban, But These States Didn’t

Summary: The Paycheck Fairness Act amends the 1963 Equal Pay Act by revising remedies for, enforcement of, and exceptions to prohibitions against sex discrimination in the payment of wages. By the Numbers: A Look at the Gender Pay Gap

Summary: This act seeks to amend Title II of the Social Security Act to credit prospective individuals serving as caregivers of dependent relatives with deemed wages for up to five years of such service. Many workers — mainly women – leave the paid workforce to care for loved ones which lowers their Social Security benefits. The bill would create a credit that can be collected as a retirement benefit. U.S. Paid Family Leave Versus The Rest Of The World, In 2 Disturbing Charts

Summary: The Pregnant Workers Fairness Act seeks to eliminate discrimination and promote women’s health and economic security by ensuring reasonable workplace accommodations for pregnant workers or workers who have a medical issue due to pregnancy. Summary: The Equality Act would amend the Civil Rights Act of 1964 to prohibit discrimination in employment, public accommodations, housing, credit, education, and jury service based on perceived or actual sexual orientation or gender identity. (H.J.Res. 51/S.J.Res 15) A Joint Resolution Removing the Deadline for the Ratification of the Equal Rights Amendment

Summary: This resolution seeks to remove the deadline for the ratification of the Equal Rights Amendment (ERA). Adoption of this joint resolution by a simple majority (51%) in Congress would mean that if three more states were to ratify the ERA, then it would become part of the U.S. Constitution. The ERA, first introduced in 1923, was passed by Congress in 1972 and sent to the states for ratification by 1979. By 1977, the amendment’s ratification fell short of the required three-fourths of the states. An extension until June 30, 1982 was granted by Congress, but the effort fell three states short. The ‘three-state strategy’ is based on expert legal analysis that the amendment remains legally viable because Article V of the Constitution is silent as to the power of Congress to impose time limits. Also, Article V does not allow states to rescind a prior ratification.

Why we need it:

Where the resolution is: